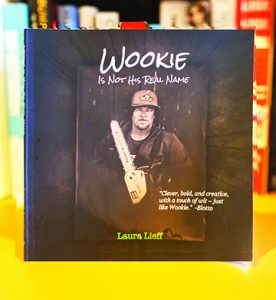 First Book: Wookie Is Not His Real Name is the first book by Chamber Ambassador Laura Lieff. Purchase your copy today at www.lauralieff.com/book.

Some stories simply must be told and Greater Glendale Chamber of Commerce member and Ambassador Laura Lieff knew that the legend of Brian “Wookie” Fleming was one of them. In the summer of 2015, she began writing about Wookie because she was inspired by the massive outpouring of support he received when his season pass was suspended for creating and hosting the most notorious invite-only snowboard event in Colorado history. But there is much more to his story than snowboarding and Lieff, a former newspaper editor for this publication, who runs her own writing, editing, and PR business called Lieff Ink (see March 2021 edition of this publication), was ready to tell it.

“Everyone likes a comeback story and Wookie is the ultimate comeback kid,” Lieff said. “He’s also a 25-year Vail Valley resident, a Beaver Creek staple, and a person whom  a lot of people know in a variety of capacities, but they don’t know the whole narrative. As a longtime journalist, I’m in the business of telling real life stories and this is a good one.”

Published in February 2021, Wookie Is Not His Real Name provides a comprehensive look into snowboard culture through the eyes of a local legend and his community. The biography also illuminates how the life-altering circumstances of a professional athlete were handled with heart and humor.

Following a career-ending injury, after which he was told he would never walk again, Wookie endured severe physical, mental, and emotional lows that changed the trajectory of his life. Exemplifying his strength and determination, he pushed through to make it back on his feet and back on a board.

“My goal with this book was to demonstrate how far Wookie has come and how he clawed his way back to the top with courage, grace, and a lot of heart,” Lieff explains. “The biography also shows that even with all the press and praise he’s received throughout the years for snowboarding, and his overall outdoorsmanship, being a father is his greatest achievement.”

A full-time Vail Valley resident since 2013, Lieff is also a writing tutor at Colorado Mountain College and a College Essay Consultant at Vail Mountain School. On Friday nights, she hosts a radio show called Bite the Bullet on 107.9 Radio Free Minturn.

Wookie Is Not His Real Name can be found at bookstores throughout Colorado. For more information on the book, or to purchase online, visit www.lauralieff.com/book.