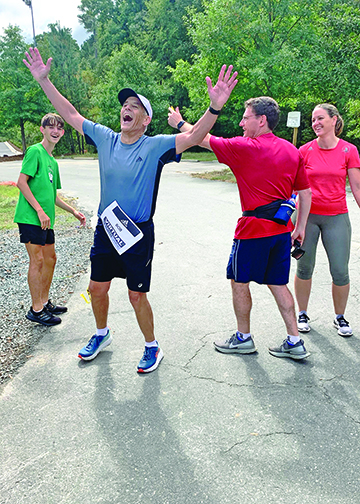 Finish Line: Bob Liebhauser celebrates with his family at the finish line of the virtual version of the Boston Marathon on October 8, 2021. 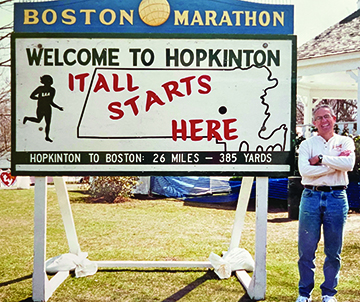 Liebhauser began running when the family moved to Texas, and lived in a neighborhood that had a trail system with miles and miles of paved trails. According to youngest daughter Darcy, the trails were part of the reason he got into running, along with wanting to push himself past his usual exercise regimen.

“I think Dad felt the ‘high’ from running for basic exercise and thought to himself, ‘Why not see how far I can push myself and try to do a marathon,’” recalls Darcy. “He also met a few runners along the way during his daily exercise routine who inspired him to try a marathon.”

Liebhauser’s first official marathon was the Houston Marathon in 1985 — a race he ran for many years. In 1987, he ran it in 2:58:59 which qualified him for the Boston Marathon in 1988. He re-qualified for every Boston Marathon after that which meant he always finished in under his qualifying time, allowing him to automatically qualify for the following year.

Last month, Liebhauser traveled to Raleigh, North Carolina, to run a “virtual version” of the Boston Marathon which is celebrating its 125th year. The virtual version means that runners registered online, which filled up with 70,000 entrants in eight minutes, tracked their miles and overall time, and submitted that information to the Boston Athletic Association.

Because it was the 125th year, a limited number of runners (who needed a qualifying time) were accepted for the in-person event and then the race was opened to another large group of those who wanted to do it virtually.

“I initially started running the Boston Marathon for the challenge of qualifying,” said 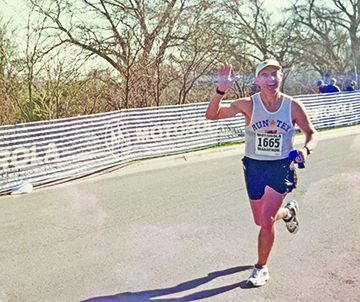 Liebhauser. “I could also stay with my sister-in-law who lived just north of Boston. Since 1995, [my wife] Sherri has attended every single race I’ve ran in Boston except the year of the bombing and the following year.”

Adds Bob’s wife Sherri, who has been the Chamber’s Program Coordinator since 2011, “Bob was ecstatic to get in this year. He loves the tradition and the whole process.”

Their daughter Kim agrees that Boston’s history is an important part of Liebhauser’s journey each year. “When Dad ran the 100th Boston Marathon it was a big deal. The town and the race have so much tradition that he loves. He could talk for hours about the course and the history of it all.”

While various family members have run marathons with Liebhauser in years past, this time Kim, her husband Bill, and their three sons (Austin is 16 years old, Dillon is 15, and Cayden is 12) committed to sticking with Liebhauser and running at his pace. They ran the Tobacco Trail marathon course in Raleigh, which is flat and previously functioned as a train track. Sherri and Darcy were on hand for logistical support.

“I’m so proud of my Dad for finishing his 25th Boston Marathon,” says Darcy. “Our whole family is grateful that the Boston Marathon opened registration for the 125th running of this marathon to virtual participants!”

When training for a marathon, Darcy explains that Liebhauser is purposeful with creating schedules. He has a weekly mileage goal that steadily increases week after week. Additionally, the schedule always includes one longer run which also increases each week and ultimately ends with a 20-mile run. Then he tapers down for a couple of weeks, whi 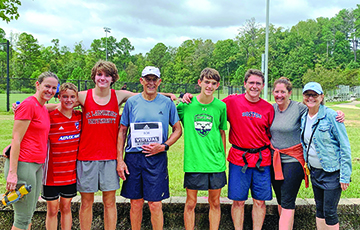 ch allows for recovery time before the actual marathon.

Adds oldest daughter Jennifer, “I believe that Dad needs goals and schedules, and he enjoys working hard training for marathons. He feels better after he runs because it keeps him focused and happy.”

Because running marathons has become a family affair, there are many fun stories and happy memories that have been told over the years.

Darcy recalls at least one family member traveling to cities like Chicago, Baltimore, San Diego, and of course Boston, among other places, and running the marathon also. “When we lived in Texas, we used to go watch Dad at the Houston marathon all the time,” she remembers. “Out-of- state experiences always included sightseeing and eating out at great restaurants.”

Adds Kim, “There were a lot of traditions he liked to do in Boston including going to the expo at the Convention Center each year and walking up the Bunker Hill Monument — all 294 steps — slowly the morning after the race.”

While most memories are positive, the toughest memory is the 2013 Boston Marathon bombing which Sherri vividly remembers. “Bob finished about 20 minutes prior, and one of his running buddies had just passed the bomb near the finish line. I was following Bob’s time through the chip updates, so I knew he finished before the bombs went off. Even though I was confident he was fine, it was a huge relief to get his after-race call. In 2014, which was Bob’s last Boston race before this year, everything was emotional with many tributes to those killed and injured the previous year, and lots of extra, new security measures.”

Now that seven years have passed, Liebhauser is glad to have completed the Boston Marathon again, even if he technically ran it in Raleigh.

“It’s every serious runner’s dream or goal to do the Boston Marathon,” says Liebhauser. “I’m thrilled to be celebrating my 25th time doing it.”

He’s also delighted to always have the entire family behind him and is looking forward to reaching his goal of running 100 marathons. Adds Sherri, “Now that he’s finished with this marathon, he is developing a plan for the next one.” No time like the present.