Most expensive gas since 2013… 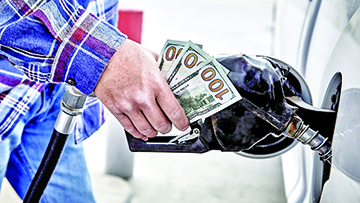 Colorado’s gas prices skyrocketed the first week of March to their highest levels since June 2013, with prices rising an average of nearly 40 cents over the span of a week — reaching an average price of $3.75 on the evening of March 7. At this rate, the average price for a gallon of gasoline in Colorado is on track to exceed the $4.09 record set in July 2008.

“Unfortunately, we can say with certainty that more price hikes are on the way — and Coloradans may soon begin to see record high prices at every fill up,” said Skyler McKinley, regional director of public affairs for AAA. “Chalk it up to the extraordinary times we’ve been living through. The pandemic fundamentally tightened the global crude oil market. Set against that backdrop, Russia’s invasion of Ukraine has severely limited Russia’s ability to sell its oil globally, further straining supply.”

A bipartisan agreement announced by Congressional leaders on March 7, 2022, to ban imports of Russian oil is not expected, on its own, to lead to further price increases — given that the United States only imports about 3% of its crude oil from Russia, and many domestic energy traders have already stopped buying Russian barrels.

A European Union ban on Russian imports could send global crude prices even higher. That’s not expected in the near term due to the 27-nation bloc’s heavy reliance on Russia’s crude supply.

The International Energy Agency (IEA) announced a coordinated release of crude oil from its 31 member countries’ strategic reserves, including the U.S., Germany, Canada, South Korea, and Mexico, to help counter the impact of rising crude prices. IEA said member states committed to releasing a total of 61.7 million barrels from their strategic reserves to reassure markets roiled by the fallout from Russia’s invasion of Ukraine. This amount — half of which is expected to come from the U.S. — is the largest coordinated release since IEA was founded in 1974. The overall impact on pricing will be limited given that the amount of oil planned for release is small in comparison to the amount that flows daily from Russia to other countries around the globe.