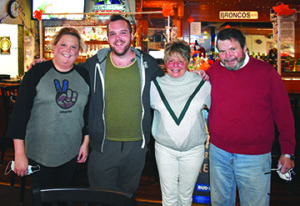 Dr. Proctor’s Team: From left to right, Lexi Griffith, Nolan Alexander, Diane Mitchell, and Tony Mitchell are all smiles as they celebrate 39 years in Glendale. The team has stuck together during the pandemic and provided a safe and fun environment.

Dr. Proctor’s Lounge opened in August 1981 by Bud and Arlene Proctor and has been slinging drinks ever since. The reason it has doctor before their last name is simple. “Guys can tell their wives they’re going to the doctor to get a shot to make them feel better,” said Diane Mitchell, Bud and Arlene’s daughter, who has run the bar since her mother passed away in 2000. One customer even wrote “therapy” in the memo section of the check he wrote when he frequented in the ’80s.

The lounge, and now bar and grill, has been a Glendale institution for 39 years. Next August will be the 40th anniversary and it has never experienced anything quite like the Covid-19 pandemic. “It’s definitely affected us, that’s for sure,” said Mitchell. “We have barriers put up at the bar, sanitizing stations everywhere, and when we have karaoke, we lift up the plastic shield and everybody is 25 feet away from whoever’s singing.” 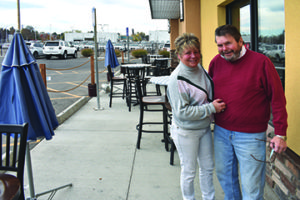 New Patio: Diane and Tony Mitchell showcase the patio they opened in June to offer more capacity for their guests.

“Our customers say they are so comfortable in here because we have someone watching the door,” said Tony Mitchell, Diane’s husband. “They feel very safe. We don’t let anyone in without a mask.” “They are really into checking every person that walks into the bar,” said Ozkar A. on Yelp. “They are keeping up with the sanitation and social distancing — great job!!”

Dr. Proctor’s Bar and Grill also built a new outdoor patio that opened in June to allow for more customer capacity. The investment has been, as Diane describes, a “lifesaver.” They are not sure what they will do as the temperatures get colder but they are hoping to work with their landlords. In fact, those landlords worked with them in a big way when the pandemic and shut down first hit. “As soon as our closure happened, they (landlords) cancelled our rent for the next month,” said Tony Mitchell.
In addition, the City of Glendale has a grant program that Dr. Proctor’s took advantage of. “The city (Glendale) gave us $2,000 which was awesome,” adds Diane. “I’m so glad we’re in Glendale. We’ve always had great rapport with Glendale.”

The biggest impact during Covid was having to close at 10 p.m. which was mandated by the state. A midnight closure was something they could handle because the extra two hours were significant. At the time of press, closing time is 11 p.m. due to the pa 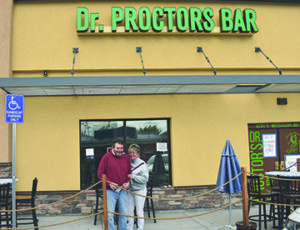 Exterior Facelift: Dr. Proctor’s Bar and Grill got an exterior facelift one year ago and Diane and Tony Mitchell are pleased with how it turned out.

With all of this said, Dr. Proctor’s Bar and Grill is making it work and looking ahead to a bright future. They feature Karaoke from 7:30 p.m. to 10:30 p.m. every Thursday and Saturday night, nightly drink specials, and a full menu which includes mouthwatering wings, hamburgers, and tacos. They have nine TVs including a big screen to watch your favorite sporting events. If that happens to be football, they have Bloody Mary’s on Sundays.

The staff has been together a long time and are like family to Diane and Tony. “This crew we have is so amazing,” says Diane. “We’re blessed. We’re like family.” In addition to being proud of her team, Diane is certainly a proud owner of one of the oldest bars in Glendale. “It’s a fun place to be,” said Diane. “People love coming here. It’s like Cheers.”
Dr. Proctor’s Bar and Grill is located at 4201 E. Mississippi Ave. in Glendale. For more information, call 303-756-1665. Follow them on Facebook @Proctors.Glen dale.Bar.