How To Watch The 2022 Olympic Winter Games

How To Watch The 2022 Olympic Winter Games

NBCUniversal will present a Winter Olympics-record 2,800+ hours of coverage across NBC, Peacock, USA Network, CNBC, NBCOlympics.com, and the NBC Sports app when the XXIV Olympic Winter Games from Beijing, China, begin this February.

How To Watch The

As with recent Winter Olympics, the NBC broadcast network will feature 18 nights of primetime coverage, beg 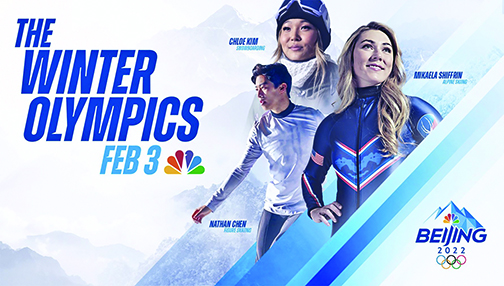 inning on Thursday, Feb. 3, the night before the Opening Ceremony. USA Network, the new home for many of NBC Sports’ biggest events, will be the cable home of the Winter Games, providing coverage from Feb. 2-20. And, as previously announced, Peacock will live stream all Winter Olympics coverage on its premium tier and immediately host replays of all competition to ensure fans won’t miss a moment.

“These Games have provided some unprecedented challenges, but by having already produced the Tokyo Olympics amidst the pandemic, we’re fully prepared and equally excited to bring all the memorable moments of the Winter Games and Team USA to American viewers this February,” said Pete Bevacqua, Chairman, NBC Sports. “In addition to the extensive coverage on broadcast and cable television, every single moment of the Winter Games from Beijing will be available to viewers on Peacock’s premium tier for the first time, providing yet another avenue for viewers to consume the Olympics. And in a media first — smack dab in the middle of the Winter Games — we get to broadcast the Super Bowl. February 13 will be the biggest day in sports media history, with the Olympics flanking Super Bowl coverage all day on NBC and Peacock — and Telemundo for the game — an unparalleled one-two punch. If you’re not excited about that kind of challenge, you’re in the wrong business. We’re ready.”

NBCUniversal is presenting its 18th Olympic Games, 12th consecutive overall, and sixth straight Winter Games, all the most by any U.S. media company.

Viewers can find exactly what they want to watch by going to NBCOlympics.com/Schedule for a comprehensive and always up-to-date viewing guide for both TV and streaming coverage that will feature personalization options for the first time. NBCOlympics.com will once again be the home for results, schedules, medal counts, athlete profile pages, and more.