Attendees: David Poticha and Christina Schiller we among the attendees at the 10th Annual Burger Battle held on August 5, 2021, at Auraria Campus. 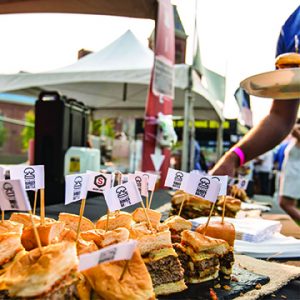 The 10th Annual Denver Burger Battle was held on Thursday, August 5, at Auraria Campus. The Chamber was well represented at this event with members Illegal Burger on hand to compete and BMW Downtown was a sponsor.

This epic battle had one simple goal: determine the Best Burger in Denver. Twenty restaurants across the Denver Metro Area competed and burger fanatics, and an expert panel of judges determined the top burgers of the town. 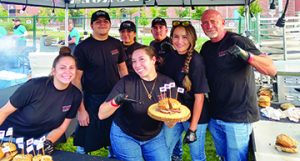 Competitor: Illegal Burger was one of the competitors at the 10th Annual Burger Battle. Jim Nixon (far right), founder of Illegal Burger poses with his staff at their booth on August 5, 2021.

To add to the ambience, there were two bands that went head-to-head on stage. ’80s band Goonies battled ’90s band Blink 90210. Both bands played sets all night long.