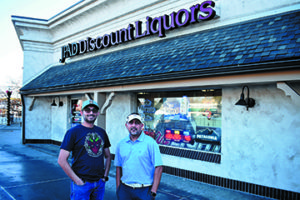 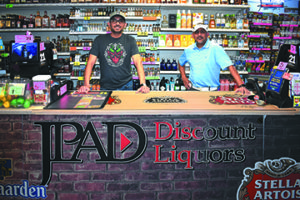 Brothers: Jatin Padhiar (JPAD), right, and Hirpal Padhiar know everyone who walks in the store and treat everyone with respect and friendliness.

If you walk into JPAD Liquors on South Holly Street, you are immediately welcomed by the owner, Jatin Padhiar who goes by JPAD for short. From then on, he will remember you and treat you like family. That’s a rare thing in the liquor store business and JPAD prides himself on operating a family-owned business.

“We are a local liquor store,” said Padhiar. “We are not trying to make millions. Just make a living and go on vacation once in awhile.” JPAD Liquors opened in 2005 after the previous owner converted an old video store into a liquor store. Heart problems forced him to sell after only having it a few months.

JPAD was laid off from AT&T and was working in a friend’s liquor store to learn the business. He was encouraged to open his own and with the help of his family, including his younger brother Hirpal Padhiar, they started JPAD Liquors in September 2005.

JPAD helped his younger brother pay for college and, in return, Hirpal worked at the store. They were new to the business and didn’t know what to expect. So, it was all han 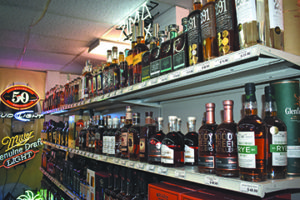 Bourbon: JPAD Liquors has an outstanding selection of local bourbon with competitive pricing.

ds on deck including their mother and father. To this day, they still help at the store when they are not spending time with family in India. Their mother especially makes sure the store is spotless. That is something that JPAD Liquors prides itself on.

As far as selection, the store is deceivingly large inside. When viewed from the parking lot, it appears to be a small store but inside, you will find a large selection of craft beer, spirits, and wine. In fact, JPAD Liquors has one of the best selections of local bourbon in the metro area. “We try to carry a lot of local bourbon,” said Padhiar. “In this area, bourbon is the number one seller.”

And the pricing is what you would expect from a local store that doesn’t do the volume as larger operations such as Argonaut, Total Wine, and Molly’s Spirits. “We try to stay very competitive to outside pricing,” said Padhiar. Where JPAD Liquors shines is the customer service and the fact that they know everyone in the community. “We have a great clien

tele,” said Padhiar. “Our community has grown. I love this location. I know everybody.”

JPAD Liquors has been a member of the Chamber for a long time. Recently, JPAD was introduced to Nick Lazzara, who owns Bloody Mary Co., at a Chamber After Hours event at Charcoal Bistro. JPAD agreed to carry his product immediately and it has been flying off the shelf ever since. That is the distinct advantage of a local liquor store with no red tape allowing a local product to occupy valuable shelf space.

Padhiar has two kids in high school and is working hard to make sure they are provided for. JPAD Liquors is open Monday through Saturday 10 a.m. to 11 p.m. and Sunday 10 a.m. to 7 p.m. They are located at 560 S. Holly Street, #4, in Denver.