Local Company, Resident Show Their Pride For The LGBTQI+ Community

Home|Banking|Local Company, Resident Show Their Pride For The LGBTQI+ Community
Previous Next

Local Company, Resident Show Their Pride For The LGBTQI+ Community 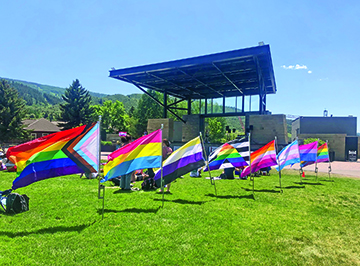 Diversity spreads throughout Colorado at Eagle County’s “Pride in the Park” 2021.

The largest annual celebration of Colorado’s LGBTQI+ communities returned to Civic Center Park last month after a two-year pandemic hiatus with over 500,000+ participants in honor of Pride Month. PrideFest is just one of the many ways Denverites recognize the LGBTQI+ community in Colorado and those individuals who work to make our communities, workplaces, and social settings more inclusive for all. But beyond Pride Month, a local company, Westerra Credit Union, and Denver resident, Mario Gil Castagnino, show their pride for diversity beyond the festivities with cohesive DEI (diversity, equality, and inclusion) initiatives.

Mario Gil Castagnino grew up as a young child in Lima, Peru, where he enjoyed a great childhood with a loving family, but coming out as a gay man seemed impossible amid the political unrest, stigma, danger, and turmoil of the ’80s and ’90s in Peru. His conservative Catholic family always knew something was “different” about Mario but because of the mentality back then that being gay was wrong, his family tried to “normalize” him.

“They loved me knowing that I was different, and for my own protection, they wanted to change that ‘difference’ in me. They wanted to normalize me,” says Mario. After graduating with a college degree in Hospitality Management in Peru, Mario took a job with the Ritz-Carlton in Colorado and it wasn’t until he moved to the U.S. that he could start to live his authentic life as a proud gay man.

After many years working within the hospitality industry, Mario stepped into his now current role as Vice President of Talent Development at Westerra Credit Union, a position he never thought possible as a young boy growing up in Lima, Peru. Part of what attracted Mario to Westerra is their focus on ensuring people a 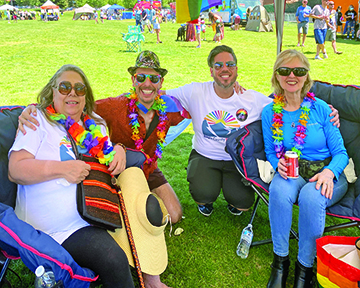 re their number one priority — whether it’s employees, members, or people in our communities. He’s been an integral part of building these priorities over the years and when Westerra started its diversity, equity, and inclusion task force two years ago, Mario knew he had to join.

The task force is comprised of approximately 38 staff members from different departments, ethnicities, and backgrounds. Over the years, the group has gained so much momentum and energy celebrating all viewpoints, backgrounds, and experiences. To ensure important work was accomplished, they instilled sub-committees, one of which was created to oversee Westerra’s sponsorship of Denver Pride Fest with participation in the Pride Parade, managing Westerra booths at Pride Fest in Civic Center Park, and participating in the Pride 5k.

“We all came together to talk about subjects that really touch the heart and that can be hard to talk about,” says Mario. These stories began an emotional journey within the company. “Until people start telling their stories, you may never know what others are going through. It brought about a lot of compassion and understanding and a lot of connections,” explains Mario. “It also provided a learning experience about each group’s sufferings and taught a piece of history so that people understood the systemic issues we face in our country today.”

Pride Month, for Mario, means an opportunity to celebrate inclusivity and love plus an opportunity to be grateful. He expresses his gratitude towards the city of Denver for celebrating pride, the organizers who are making a difference in the community, and for the people who come together to celebrate love and humankind. “As a little kid I thought I was alone in the world and now I know there are other people who think like me and share the same desires. And to share that with them is so special to me,” says Mario.

Mario claims “there’s still a lot of work to be done.” He enjoys seeing the progress over the years, including in Eagle County where they held their third-ever pride event this year. But they were quickly reminded of the reality of how much more safety and security needs to be considered for high-profile events such as Denver PrideFest. “It is sad we still have to think about this still.” He has a lot of mixed feelings about the progress we have made but is very grateful for his family and community. “I can only fight hate with love and compassion,” Mario concludes.

He lived for years with his “secret” and it wasn’t until he was in a committed relationship with his partner, that Mario eventually came out to his parents and family, They accepted him with open arms and Mario says his parents have come a long way since coming out to them. His mother is now with him in the U.S. and attended her first Pride event in Eagle County, CO last year, which marked a huge moment in his life.

Mario wants to help the LGBTQI+ community because he knows first-hand the feelings of loneliness, sadness, and defeat that come with not expressing who you really are. You never know the path life takes you, but Mario holds a big role at Westerra Credit Union and at Pride Fest this year and he is fully aware of the positive ripple effects of spreading love, encouragement, and acceptance to his workplace and his city.