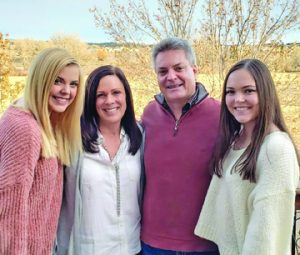 Family Affair: Left to right, Becky, Laura, Barret, and Jenny O’Brien have helped steer O’Brien Rugby through its humble beginnings to the flourishing business it is today. 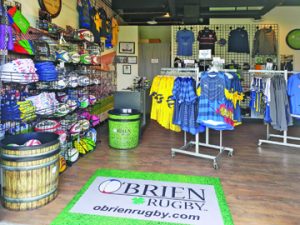 Rugby Gear: The store located inside Infinity Park has plenty of stock items to choose from such as Raptors gear. Shoppers can also customize their gear for their own team. 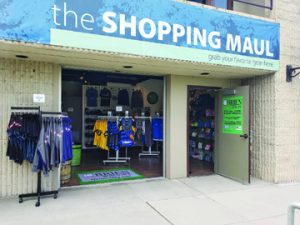 O’Brien Rugby, the family business which started in 2007, has grown as fast as the sport it supports. Barret O’Brien created O’Brien Rugby, shortly after the completion of Infinity Park, at the time, the only dedicated Rugby stadium in North America.

O’Brien Rugby had humble beginnings with a little nook, two feet deep and 10 feet long to sell its apparel. Eventually, they graduated to a folding table with boxes stacked behind them. When they invested in a 10 X 20 tent, O’Brien Rugby was well on its way to bigger and better things. They took over a building South of the police department and converted it into a store.

Now, O’Brien Rugby’s store can be found inside Infinity Park with its own brick and mortar store and Colorado’s only dedicated retail rugby store. Guests can visit the store during rugby games or by appointment seven days a week.

Rugby is known for its tight-knit, family atmosphere. O’Brien Rugby is no different. The O’Briens are in the rugby culture, not the rugby business. Barret’s wife Laura works full-time for the business and their daughters, Becky and Jenny, a

Charitable: O’Brien Rugby donates a percentage of each sale to benefit the Glendale Youth Rugby Foundation. They also donate to other local fundraisers such as those at Cory Elementary School.

re also invested by helping with bookkeeping and social media.

“It’s a sport that certainly has a business element that surrounds it, but what you will find is that fans and players love to evangelize for th 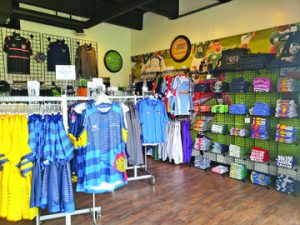 e sport,” said Barret O’Brien, founder of O’Brien Rugby. “I’ve never seen this sense of camaraderie in any other business venture I’ve been a part of.”

O’Brien Rugby continues to support the growth of rugby in the area as the official provider of apparel for the Glendale Raptors, and of fan apparel and merchandise for RugbyTown USA. They also provide team and fan apparel for several other local, and national rugby organizations.

O’Brien Rugby is also engaged with charitable activities with the community. A percentage of each sale benefits the Glendale Youth Rugby Foundation. “We donate to a lot of charities,” said O’Brien. “We give them raffle items and we give a lot of money to Rugby Colorado every year because we believe in that entire foundation and how they are growing the sport of rugby in the state of Colorado.”

The support is a two-way street. The Chamber has also been instrumental in the success of O’Brien Rugby. “We’ve gotten fantastic support from the Chamber supporting O’Brien Rugby,” said O’Brien. “The articles that have appeared in the newspaper over the years have given us great exposure.”

People interested in purchasing items from the store can do so at their store at Infinity Park (950 South Birch Street) or online at www.obrienrugby.com. Stock items such as Raptors gear are available as well as customized items for those interested in gear for their own team. For more information, call 720-445-MAUL (6285).