One Of Glendale’s Finest Steps Down From Chamber Board

One Of Glendale’s Finest Steps Down From Chamber Board 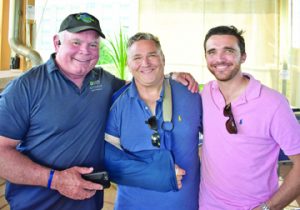 Glendale Mayor Mike Dunafon, left, and Ronnie Cook, right, were among the attendees at Jax Fish House to wish Scott Franssen, center, well. Franssen has resigned from the Greater Glendale Chamber of Commerce Board of Directors and is moving to London.

The Greater Glendale Chamber of Commerce hosted a farewell party for Board Member Scott Franssen at Jax Fish House in Glendale. Franssen served on the Chamber’s Board for 15 years. He and his significant other, Ronnie Cook, are moving to London, England, to embark on a new adventure.

Franssen had been a nonprofit professional in Colorado since 1997. Over the years, he has worked for the YMCA of Metropolitan Denver, Central City Opera House Association, the National Sports Center for the Disabled, the Tennyson Center for Children, and Family Tree. He earned his Master’s degree in Nonprofit Management from Regis University and also teaches nonprofit leadership master’s level courses.

As demonstrated by his dedication to working for nonprofit organizations, Franssen actively seeks opportunities to serve and help others. In 2004, he was elected to the Board of Directors for the Greater Glendale Chamber of Commerce.

In an effort to be more involved in the future development of the City of Glendale, Franssen joined the Glendale Planning Commission in 2011. From 2012 to 2016, he was a member of the Glendale City Council — a position that allowed him to represent the community in which he lived, and further demonstrated his willingness to serve.

Franssen will be missed on the Board of Directors as he added a sense of humor, humility, and professionalism to all facets of Chamber leadership. “Scott was an integral part of the Glendale community for a long time,” said Mark Smiley, President of the Greater Glendale Chamber of Commerce Board. “His contributions are appreciated and on behalf of the Board of Directors, we wish him well in his new endeavor.”

Franssen will move to London in September but has vowed to keep in touch with all those who have been a part of his life for decades.