Raising Cane’s Chicken Fingers, a restaurant serving chicken fingers, cole slaw, French fries, Texas toast, and fresh squeezed lemonade, opened their Colorado Blvd. location on December 15, 2020, and has seen a steady flow of customers ever since. A stone’s throw from Glendale, Raising Cane’s has enjoyed diving right into community projects including supporting local elementary schools Cory and McMeen. “Sales have been steady, and the customer flow has been consistent since we opened, said Steve Treacy, Raising Cane’s Restaurant Leader for Store 401 on Colorado Blvd. “The community seems to be enjoying it. We have seen our late-night business grow a little bit every week, so people now understand that we are open later.” The restaurant stays open until 1 a.m. most days and 2 a.m. on Friday and Saturday nights.

Founded in 1996 in Baton Rouge, Louisiana, because Raising Cane’s focuses on only one thing — chicken fingers — they are able to d 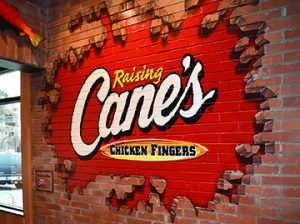 o it better than anyone else. It’s what they call ONE LOVE. “There are five things on our menu, and we execute it as well as we can,” said Treacy. “It’s the biggest love that we have. We pride ourselves on the fact that our lemonade is fresh squeezed lemons every day. We make our sauce by hand every day and our chicken is always fresh, never frozen and we marinate and brine it ourselves. The quality of what we do with this small menu is important to us.”

Todd Graves’, the founder of Raising Cane’s, path to success was one filled with challenge, hard work and determination. In 1994, as a new college graduate, 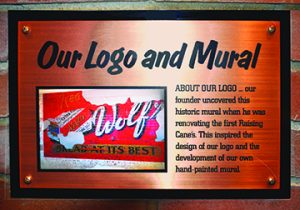 Graves sought out funding for his restaurant venture. Undeterred by bankers who found his idea laughable, he decided to take matters into his own hands and raise his money the old-fashioned way — hard work.

After working in oil refineries in California and salmon fishing off the coast of Alaska, Graves returned to Baton Rouge and opened his first restaurant in 1996 near the gates of LSU. He named the restaurant after his yellow lab, Raising Cane.

Raising Cane’s made joining the Greater Glendale Chamber of Commerce one of the first orders of business upon opening their new store. “One of the main reasons we joined the Glendale Chamber is because we did a search on area chambers and it seems like a good group of people,” said Treacy. “It gives us a chance to network with other businesses around us and become part of the community.”

“When we evaluate chambers specifically, we look at the value that comes from it and Glendale offered a significant amount of value in the relationship that we were going to be able to generate with them,” said Daniel Paxton, Area Leader of Marketing — Denver/Colorado Springs for Raising Cane’s Chicken Fingers. “So, from that perspective, within the first month of being on board, Jeff [Jeff Allen, Chamber COO] and Mark [Mark Smiley, Chamber President] sat down with us and introduced us to several other folks within the chamber and we have already been to a couple of the chamber events and had an opportunity to meet other folks and generate some good contacts and community partners within the Glendale area. The uniqueness and the value we get from this relationship is something that can’t be paralleled with anybody else.”

And as a true Chamber member focused on boosting the economy, this location hired 100 people to get the restaurant up and running. They now have 70 people employed at the store. “We’re a people first company,” said Treacy. “There are a few things that are really important to us. Obviously, the quality chicken finger meals, but our culture, and being part of our community and our crew are all things that are most important to us. We close on major holidays even though they are big money generators for restaurants, but we want to take care of our crew and have them be at home on those holidays with their families. The fact that we are so committed for putting our crew first and doing what’s best for them is what is most important to me. If we do all of those things, we are going to be successful.”

Follow Raising Cane’s Chicken Fingers on Twitter @Raising_Canes or Facebook @RaisingCanesChickenFingers. You can join the Caniac Club by visiting www.raisingcanes.com/caniac-club or for more information, visit www.raisingcanes.com. Raising Cane’s Chicken Fingers at 1190 S. Colorado Blvd. is open Sunday to Thursday, 10 a.m. to 1 a.m., and Friday to Saturday 10 a.m. to 2 a.m.