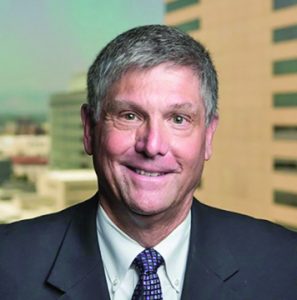 Matt Giacomini is a third-generation attorney who graduated from the University of Colorado Law School in 1984, and started at The Law Firm of Springer & Steinberg  on September 4, 2002. All three generations (grandfather, father, and Giacomini) attended CU Law School. An interesting side note is that Giacomini’s grandfather’s brother Frank was a physicist who attended the University of Berlin with Albert Einstein.

Giacomini has been an attorney for 37 years having spent 13 years at Burg Simpson Law Firm. He was recently named partner at Springer & Steinberg. When he started with the firm nearly two decades ago, it seemed unlikely that Jeff Springer or Harvey Steinberg would entertain the idea of other partners in their firm. It was simpler with just the two of them. The firm has grown over the years to total 14 attorneys and they have decided to add three new partners: Matt Giacomini, Steve Burstein, and Matt Holycross.

“Matt Giacomini has been with us for nearly 20 years,” said Jeff Springer, Partner at Springer & Steinberg. “He is precisely the kind of person you would want as a partner. He is loyal, dedicated, dependable and an effective champion of his clients’ interests. Perhaps most importantly, he is a wonderful family man who, along with his wife Jonna, has raised two amazing kids [Joseph and Michael] who are extremely successful in their own right. I should add that he is also a dedicated and loyal CU Buff alum. Spri

nger and Steinberg and the city of Glendale are all better off and quite fortunate for having had Matt at our side.”

Giacomini is a former Deputy District Attorney who has earned a stellar reputation as a civil and criminal trial lawyer. He has an AV Preeminent Rating with Martindale-Hubbell and has been selected for inclusion as a Super Lawyer. His trials include acquittals for clients charged with serious criminal offenses, including sexual assault on a child. In one high-profile sexual assault case, Mr. Giacomini’s client, a principal of a school, was found not guilty by a Jefferson County jury.

“I’m a third-generation Colorado lawyer and my practice is both criminal defense and civil litigation,” said Giacomini. “My criminal defense practice has allowed me to fight for folks who face criminal charges. On the civil side, I represent injured people whose lives have been changed by injury. My representation of these clients is enhanced by my experience having tried hundreds of cases both as a former prosecutor and as a former insurance defense attorney.”

His personal injury cases include 7-figure settlements as well as significant jury awards in motor vehicle accident and employment discrimination cases. Consistent with his experience in both criminal and civil law, Giacomini has successfully represented clients before licensing and other administrative agencies. His litigation and trial experience includes defending clients in civil actions facing allegations ranging from fraud and personal injury to business disputes, which makes him well-qualified to represent plaintiffs, the focus of his civil law practice.

Giacomini is also the Prosecuting Attorney for Glendale Municipal Court and serves as Assistant City Attorney for the Glendale City Council. “I love the Glendale work,” said Giacomini. “It’s a very business friendly city and we don’t look to hammer people [in the court]. A fine in Aurora’s court might be $600 and for the same offense, $150 in Glendale.”

Making partner is a milestone in Giacomini’s career. He has known Jeff Springer since he was 15 years of age growing up in Sterling, Colo. What does making partner mean to Giacomini? “Stability, success, and growth,” he said. “It’s great for Burstein and Holycross too. God willing, if I stay healthy including upstairs, I don’t plan to hang it up for a long time.”

Springer & Steinberg is located at 1600 Broadway in Denver. Visit www.springersteinberg.com to learn more.