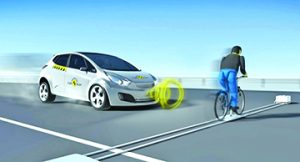 New research from AAA has found that Automatic Emergency Braking (AEB), a safety system touted by manufacturers as lifesaving, crash-preventing technology, struggles at high speeds and fails at intersections — two of the deadliest scenarios encountered by drivers. The news comes as 20 automakers representing more than 99% of the U.S. market pledge to make AEB standard equipment on all their new vehicles, with 83% of all 2022 model year vehicles already equipped with the technology as standard.

“Automatic Emergency Braking is exceptional at preventing fender benders,” said Skyler McKinley, regional director of public affairs for AAA. “Here’s the problem: It’s commonly marketed as something that can save lives, even while testing reveals it can’t yet handle faster, more realistic speeds, or the situations we encounter on the roadways every single time we drive.”

AEB uses forward-facing cameras and other sensors to automatically alert the driver and apply the brakes when a crash is imminent. It reduces rear-end crashes at slower speeds, per an Insurance Institute for Highway Safety study that found vehicles equipped with AEB exhibited a 50% decrease in police-reported rear-end crashes compared to non-equipped vehicles.

The technology has been refined over the years with upgraded hardware and software. AAA sought to determine if the latest generation of AEB can handle higher speeds and detect moving vehicles in its path at intersections, particularly when presented with T-bone and unprotected left turn scenarios. Together, those crash types accounted for nearly 40% of all fatalities involving two passenger vehicles from 2016 through 2020.

AAA strongly urges automakers and regulatory agencies to focus on system design and test protocols to better handle the types of crashes when injuries and fatalities commonly occur.

Automakers must improve AEB systems to assist drivers in intersection-based crash scenarios. Automakers should include AEB systems as standard equipment on all their makes and models.

Drivers must recognize an AEB system’s limitations and remain engaged when behind the wheel.

“Today’s research makes it clear: While automated technology can make you a safer driver, it can’t save your life — so no matter how smart you think your car is, you must stay vigilant,” McKinley said.

AAA selected four vehicles for testing, choosing two of each driver monitoring design type, camera-equipped, and input from the steering wheel. AAA does not rate vehicle performance. The vehicles were as follows:

The vehicles were procured directly from the manufacturer or specialty rental fleets. To ensure the proper functioning of the AEB system, all vehicles were serviced at dealerships. Please refer to the full report for methodology details, including specific testing equipment and test track characteristics.