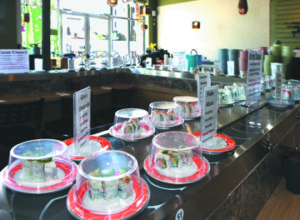 Fresh Sushi: Fresh rolls are continuously made as customers pick a plate that looks good to them. 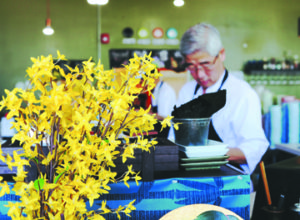 Owner: John Koo (background) is the owner of Sushi Kai which just opened in Glendale. Koo has been in the sushi business for 19 years. 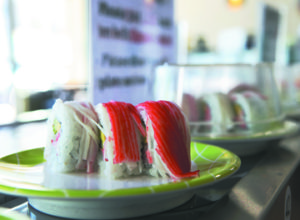 Newest Sushi Restaurant: Sushi Kai in Glendale CitySet specializes in freshly made Japanese food, conveyor-belt style. Sushi Kai is one of five restaurants in the Denver area that uses this system.

Sushi Kai is Glendale’s newest sushi restaurant, located in the space formerly occupied by Platform T in Glendale CitySet. They specialize in freshly-made Japanese food, conveyor-belt style. Choose from over 50 different kinds of sushi rolls, as well as hot, made-to-order Japanese food such as teriyaki, katsu, and ramen.

Sushi Kai owners bring combined four decades of experience in Japanese cooking to bring you the freshest sushi, of the highest quality, at the most affordable price. John Koo, Owner and Chef of Sushi Kai, is happy to be in Glendale. “The reason I chose Glendale was one of my friends recommended this area,” said Koo. “He told me that Glendale is a business-friendly city with good foot traffic. That same friend texted me when this spot became available. I came here with my wife and she said let’s do it.”

Koo has been in the Sushi business 19 years. His previous restaurant was in Boulder and when a rotator cuff injury happened three years ago, his doctor said he didn’t need the surgery but needed medical treatment for six months. After it healed, he went to another sushi restaurant as a sushi chef for 18 months.

After walking through the space formerly occupied by Platform T, Koo knew how he wanted to transform the space. He likes high ceilings to protect the food. And he wanted to use the conveyor belt system to make it a unique dining experience.

Sushi Kai has fresh sushi winding around on the conveyor belt each hour. This conveyor belt was invented 75 years ago by Japanese sushi chef Yoshiaki Shiraishi. He had problems staffing his small sushi restaurant and had difficulties managing the restaurant by himself. He got the idea of a conveyor belt for sushi after watching beer bottles on a conveyor belt in an Asahi brewery.

The sushi conveyor consists of a thin, narrow conveyor designed to fit within the tight confines of a sushi restaurant. Japan has about 7,500 systems and have been very popular. Sushi Kai is one of five restaurants in the Denver area that uses this system.

Fresh rolls are continuously made as customers pick a plate that looks good to them. Customers may also directly place orders via their wait staff, but most simply pick their dishes from the belt. The final bill is based on the number and type of plates.

“Loved it and will definitely be returning,” said Lisa D. on Yelp. “I highly recommend the dragon in lake (smoked unagi) and sashimi. If you need to eat quickly, this is a great place to drop in, get your fill of tasty sushi and be on your way.”