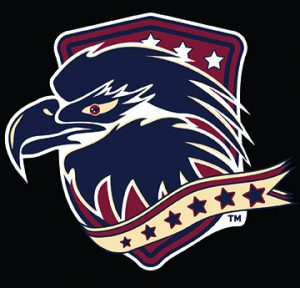 The Colorado XOs crossover academy will look a little different moving forward as the club is proud to unveil a new team name, look, and feel as they change to the American Raptors. “The Raptor name has long been a symbol of rugby in Glendale,’’ Glendale City Manager Linda Cassaday said. “That’s why we feel it reflects our crossover program and team as we move into the future.”

As a part of the updated look and feel, the American Raptors released a new logo mark and a kit/uniform partnership with O’Neills Rugby based in Ireland. The new kit reflects American pride but is also not the traditional red, white, and blue colors. “We wanted to reflect an American theme but use colors that were non-traditional like maroon, tan, navy, and grey,” Director of Marketing Pam Dunbar said. “These colors provide that weathered and worn Americana look, which fits with the unique toughness of rugby players and the sport’s history and culture.” The new logo designed by Glendale’s Design and Brand Manager Justin Purdy is sleek and matches the current logo landscape of American professional sports.

tball, basketball, wrestling, track and field from preeminent college programs and professional leagues like the NFL and CFL. Athletes are provided housing, treatment, meals, and full-time professional rugby coaching. It has long been the belief of those who brought rugby to Glendale that elite athletes could be trained and taught the game of rugby. The goal of this program is to train these elite athletes to be the best rugby players they can be, extending the reach of the game and ultimately grow rugby in the United States.

After four months in the program, six members of the Colorado XOs — Kaleb Geiger, Max Dacey, Ma’ake Muti, Gelen Robinson, Shawn Clark, and David Still — were signed to Major League Rugby teams for the remainder of the 2021 season. Two players — Still and Clark — were recruited for the USA U23s sevens team that just participated in the RugbyTown 7s tournament and won the Bowl championship. The ultimate goal of the program is to help inject the United States national team with elite talent to compete on the global stage.

The American Raptors will continue their fall season with a match on October 2, 2021, at 3 p.m. against the Seattle Rugby Club at Infinity Park. More information about the team and match can be found at AmericanRaptors.com.