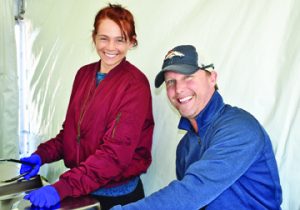 Chamber Members: Sean and Nissa Sutton are all smiles while volunteering their time to serve food to the hungry on March 10, 2019. The Suttons own SleepNation, a mattress company on Colorado Blvd. 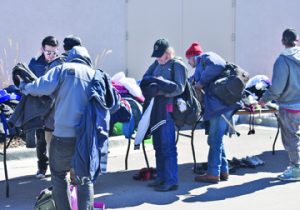 Clothing: Members of the community and Chamber members donated warm clothes to hand out to the homeless on March 10, 2019. These clothes were sure to be put to good use ahead of the snowstorm that rocked Denver on March 13, 2019. 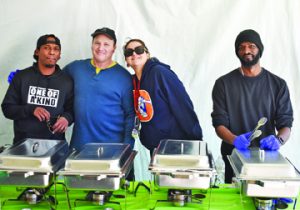 Shotgun Willie’s and members of the Greater Glendale Chamber Of Commerce once again partnered to feed and clothe the homeless. This time, the event was held in the parking lot on Sunday, March 10, 2019, rather than around Thanksgiving time. The thought process is that the homeless are still hungry in March and having the event four months after the usual time would allow for less competition amongst charities and serve a greater good.

The event featured a menu of spaghetti, garlic bread, salad, dessert, and soft drinks rather than the traditional turkey and stuffing. Longtime Chamber member The Bull and Bush Brewery made the Bolognese sauce while Old Chicago provided the garlic bread, parmesan cheese, and red pepper flakes. 2018 Business of the Year, Esters Neighborhood Pub, made homemade brownies and Sam’s No. 3 provided all of the salad and dressing.

In addition, the Glendale Sports Center set up a donation box for warm clothes and members of the center contributed. Also, Sean Sutton, the owner of SleepNation, who recently took home the hardware for Mid-Sized Business of the Year at the Annual Chamber Luncheon, brought his family to the event to volunteer and help serve the food throughout the afternoon.

“We are proud to once again give back to the community,” said Debbie Matthews, owner of Shotgun Willie’s and Chamber board member. “Our staff works hard putting this together and we appreciate the support of Chamber members to assist with this endeavor.”