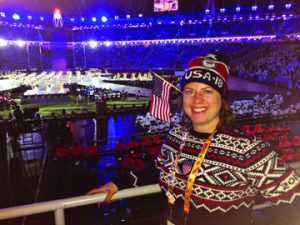 There are Winter and Summer Paralympic Games, which since the 1988 Summer Games in Seoul, South Korea, are held almost immediately following the respective Olympic Games. All Paralympic Games are governed by the International Paralympic Committee (IPC).

The first Paralympic Games were held in Rome, Italy, in 1960 and featured 400 athletes from 23 countries. In 1976 Örnsköldsvik, Sweden, staged the first Paralympic Winter Games. The Games are now the second biggest sporting event in the world.

The most recent Paralympic Winter Games were held in PyeongChang, South Korea, from March 9-18, 2018. The United States led the way with 36 medals in the games that feature 80 events in six sports. 564 athletes from 49 countries competed in the games.

The Chamber’s very own Dr. Jamie Shapiro was one of only three mental performance consultants contracted to help the U.S. athletes compete, one of which is employed full-time at the United States Olympic Training Center in Colorado Springs.

Specifically, Shapiro works with Paralympic alpine skiing and snowboarding athletes. She started working with them shortly after the 2014 Paralympic Games in Sochi. Back then, there were not any sports psychologists on the ground in Sochi. After there were a number of traumatic crashes at those games, it was realized that there needed to be professionals on hand to deal with the aftermath.

Shapiro and her colleagues help the athletes with whatever might be on their mind from laying out a race plan to regulating their nerves. Managing distractions is another important aspect. “The Paralympic Games are different than any other race that they’ve done,” said Shapiro. “They’ve done World Cups, World Championships, but the Paralympic Games have a lot more media and a lot more pressure.”

for Shapiro and the other mental performance consultants as well. “Part of it is regulating my own self talk and pressure and not feel like I’m taking on their victories or losses,” said Shapiro.

“It was definitely one of the highlights of my career,” said Shapiro. “Three and a half years of work led up to these three weeks of being at the games. We really knew the athletes because we built relationships and it was really nice that they knew how to use us. We don’t want them to wait until there is a problem. We want them to be talking about the mental side of this as they go and not just wait until there is a problem. By the time they got to the games, they knew to check in with us.”