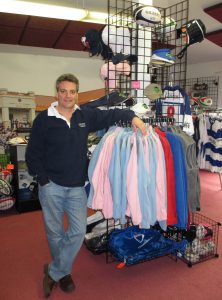 O’Brien Rugby is the only dedicated rugby store in Colorado, and it is located right in the heart of Glendale.  In fact, the O’Brien Rugby can be found in the shadows of Glendale’s Infinity Park – home to the Glendale Raptors rugby team.

Owner of O’Brien Rugby, Barret O’Brien, chuckles when he tells how he hardly knew anything about the game of rugby when he landed the opportunity, three and a half years ago, to supply all the merchandise and apparel for the Glendale Raptors.  O’Brien was fortunate to have a cousin in England who he could turn to for a quick lesson in rugby and once he understood the game, it was no turning back and O’Brien was hooked.

“I enjoy the camaraderie associated with rugby – not only amongst the players but the fans too,” says O’Brien. “I enjoy the fact that after a game, fans and players alike, gather to enjoy a beverage at Infinity Park’s Try Club, and share experiences from the game and sport that draws them all together.”

O’Brien not only has a store in close proximity to Infinity Park,  but on game days, operates the Shopping Maul, located within the stadium where supporters can purchase all types of merchandise from rugby jerseys to caps to key rings to coffee mugs.  Protective gear, which includes scrum caps, body armor, boots and socks, are also available for purchase.  This is in keeping with O’Brien’s vision to provide a “one-stop” rugby shop for rugby supporters and players.  The good thing is that all these products are available on his web site too.

O’Brien Rugby is proud to be one of the sponsor’s of the Glendale Raptors, who are the current Division I Men’s National Champions and the Raptors Women’s team, who have just earned promotion to the Women’s Super League Division.  O’Brien’s love for rugby has led him to become involved with rugby at many levels and as such, O’Brien is the current Executive Director of the USA International Youth Rugby Foundation.  The aim of this foundation is to promote rugby in the youth by holding clinics to educate and identify potential rugby talent, supply rugby jerseys to the lesser privileged sectors and donate rugby balls where possible, to name a few.

Recently, O’Brien Rugby was appointed the official supplier for the Air Force Academy’s rugby fan merchandise.  “This is the start of great things to come,” hopes O’Brien.  It is his five year plan to become involved in rugby at a national level.  With this foresight and passion, there is no stopping O’Brien in making O’Brien Rugby the place to satisfy all your rugby needs, both locally and nationally too.