Home|Uncategorized|Rugbytown Documentary Series To Air On ESPN
Previous Next

Spring Media has secured a deal with Disney for its Australian, New Zealand, and Pacific Island markets to air the documentary series centered around the Colorado XOs professional rugby player development program.

“RugbyTown” is a docuseries shot and produced by Rugby Factory — an international sports media agency — around the Colorado XOs rugby team in Glendale, Colorado. The XOs are a team composed of high-level crossover athletes from professional leagues and college football, basketball, wrestling, and track & field programs. The XO program is designed to help train elite athletes to be professional rugby players and to ultimately help the United States win the Rugby World Cup.

The international full-service sports media agency and Rugby Factory have agreed on global distribution outside the U.S. for its new documentary series —RugbyTown — ready to air in the summer of 2021.

RugbyTown is a Crossover Academy based in Glendale, that recruits NFL-quality American athletes and trains them full-time in a residential high-performance environment. While athletic excellence is a must in the competitive recruitment process, prior rugby experience is no pre-requisite. The ambition is to lay foundations for U.S. national team success — and viewers are along for the ride.

“RugbyTown USA’s mission is to help the United States win the Rugby World Cup within the next decade. The rugby world has long seen America’s greatest athletes on the football field or the basketball court, but now the RugbyTown Crossover Academy is training those athletes to play rugby at the highest levels internationally,” says Mike Dunafon, Mayor of Glendale, Colo. “We are delighted to be working with Spring Media to offer the RugbyTown series to the world so that viewers can get to know the players and coaches who have set out on this incredible life-changing and historic journey.”

For the next six years leading up to the tournament, a Rugby Factory filming crew will be lodged at RugbyTown and documenting every step of the way of the 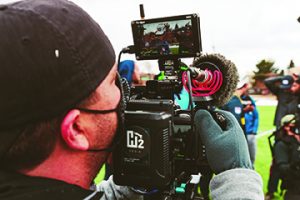 ir historical journey. The premiere season will feature 10 episodes ready for distribution on July 1 of this year, and season two will drop at the end of 2021.

“With our embedded production team, we’ve captured the players’ transformation from individual athletes into a cohesive rugby squad,” says Patrick Guthrie, Co-Founder & Chief Content Officer at Rugby factory.tv. “RugbyTown is the story of these extraordinary young men, their coaches, their families, and their mission to win the World Cup, all told by the players and coaches themselves.”

U.S. college sports, a multibillion-dollar industry, sees thousands of exceptional athletes enter its development system — although only a select few exit with pro contracts. American football in particular provides few alternatives beyond the NFL. In light of this, the academy’s backers — former runners of Major League Rugby-side Colorado Raptors — argue that skills are adaptable to the sport by designing a rigorous training program, and that there is abundant growth potential in a country of near 330 million.

“We are thrilled to be partnering on the worldwide distribution for such a multifaceted series — both tailored to the global sports audience, and those looking for high-quality entertainment in general,” says Craig Neilson, Commercial Manager at Spring Media. “Truth is, this is more than just a sports documentary; it masters the entertainment, drama and off-the-pitch bond amongst some of the best athletes from top U.S. sports — like American Football, Basketball, and Ice Hockey — on a quest to fulfilling their dream of lifting the World Cup trophy.”

The 10-episode first season of “RugbyTown” is available now and season two will be ready for distribution by the end of 2021. More information about season one can be found at www.springmedia.se/rugbytown. You can follow along with the team on Twitter and Instagram (@Rugby TownNTC) and you can follow along with Rugby Factory on all of your favorite social media channels.